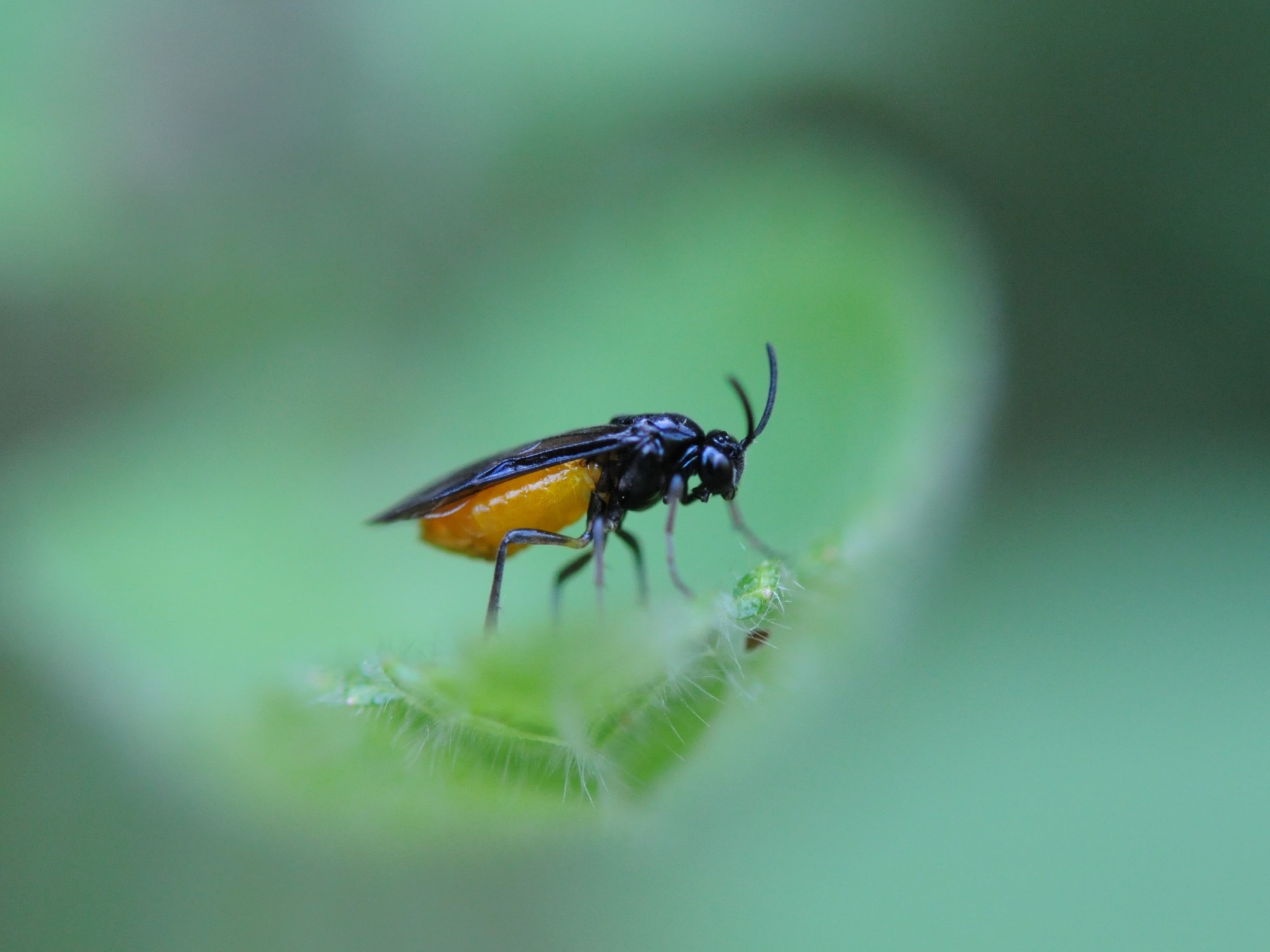 Wood life isn’t all hard work with the Silky saws. We camped over night in early June for the first time this year and then enjoyed a 25 minute stroll through the beautiful local English country lanes for Sunday lunch at the local farm shop / restaurant. Well, it should have been 25 minutes but the hedgerows were bursting with wildflowers and insects and it took rather longer. These are just a small sample of the flies we saw.

A male Yellow Dung Fly (Scathophaga stercoraria), in the clearing. Plenty around, which is always a surprise given that we are far from the nearest cow pat. See our previous post here.

Based on the characteristic stance in the Hedgerow shadows, ready to pounce on smaller flies, and the NatureSpot pictures, this looks to me very like a female yellow dung fly, though there are many similar. They look quite different from the males don’t they?

Not one we’ve seen before, but it looks like a Large Rose Sawfly – Arge pagana. Its quite common and the hedgerow did have wild roses in the mix. NatureSpot tells us this. Like all sawflies, female Large Rose Sawflies are in possession of a little saw. With it they make parallel cuts in the fresh shoots of the host plant. In the cut a bunch of eggs is deposited. The larvae hatch quite quickly and move in a group to the freshly emerged leaves. The young larvae (yellow with black spots) stay together for quite some time, capable of eating the entire shoot. Older larvae lead a more single life and eat from older leaves as well.

Our old friend the Scorpion Fly, sunning itself on our tent in the clearing. See our previous post here.

Another one we haven’t blogged before, a Pellucid Fly (Volucella pellucens) on hedgerow Clematis. It’s particularly fond of brambles and umbellifers apparently, and there was plenty around so it was probably sleeping off a big breakfast. NatureSpot tells us that its larvae live in the nests of social wasps and bumblebees, eating waste products and the bee larvae.

Just one last fly for this post. I’m pretty confident this is one of the soldier flies, a male Broad Centurian – Chloromyia formosa. Another fan of the Hogweed apparently. Its eyes are covered in black hairs which I would have thought was a disadvantage but obviously they serve some purpose.

2 thoughts on “A Stroll in the Country”